You are here: Home / Fishing Report 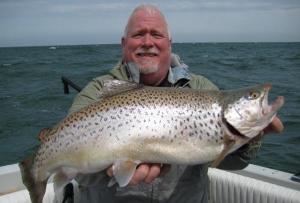 The forecast for fishing in 2021′ is quite bright. Fish species like Brown Trout, Lake Trout, Steelhead and Walleye are all on the rise. Covid reared its ugly head in 2020′ but it did not affect the “World Class” fishing that we experience in Eastern Lake Ontario.  Brown Trout Lodge (Sodus Point & Pultneyville, NY) was put on hold due to the pandemic but will be up and running as usual in 20201′.  The Charter Fishing Industry never opened in New York State until May 15th in 2020′.  Consequently, many of the shoreline Brown Trout were never targeted by anglers.  A huge year class of fish made it through 2020′ without significant angler pressure.  This means that 2021′ should be INCREDIBLE for fishing opportunity on these species!  There is nothing like tangling with a HUGE FOOTBALL BROWN in skinny shoreline waters!  Come check it out this spring! (Be sure to watch our 150+ videos on our YouTube Channel located at Bill Saiff Outdoors) 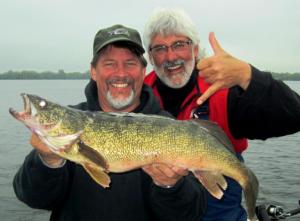 Trophy Walleye – May, August and October through November!

Walleye fishing was extremely good in 2020′.  While the spring fishery (May) was not as dynamic as the fall fishery, both were good!  The added bonus was that we took some incredible Northern Pike while pursuing Walleye!  In the spring of the year, we generally target Walleye with full size Planer Board patterns.  During the Fall Fishery, we generally utilize mini-boards to target these fish as they return to the harbors and bays!  Anglers should expect to see fish in the 5-13 lb. range.  Walleye are tremendous table fare but we always encourage our fishermen to release the largest spawning females.  This year’s October and November fishery was “World Class”!  We saw vast number of Walleye taken that eclipsed the 10lb. mark.  We even took a few examples that reached 13 pounds.  Anywhere you travel in North America,  this is considered top flight fishing! 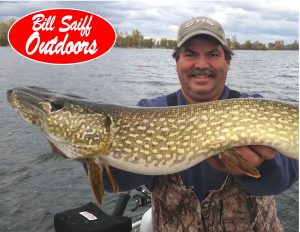 Big Northern Pike have long been a specialty of the Saiff Charter Fleet!!!  In 2020′, we took some dandy Pike during our Spring Fishery but out Fall Fishery produced some lunkers as well!  Anglers can expect to take fish in the 8-15 lb. range but plenty of BIG NORTHERN PIKE will be taken each season between 15 and 20 pounds.  This past season, our old friend Eric Rosencranz (NY) took a GIANT NORTHERN from Black River Bay that eclipsed the 20lb. mark.  The fish was over 45″ inches long and was released for another angler to catch! (Great Job Eric) 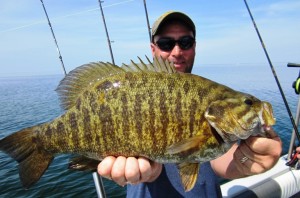 Huge Smallmouth Bass reside in Eastern Lake Ontario!  Many anglers enjoyed catches of their Personal Best Bass in 2020′.  There were enough GIANT BASS taken between 5 and 7 pounds that we quit keeping track of them.  Capt. Mike McCarthy is holding a 6 1/2 lb. Bass in the photo above.  This fish was taken during the 1st week of Bass Season on the back side of Galloo Island!    The Fall Fishery is also an excellent time to target Huge Bass!  There is a reason that Pro Bass Tournaments come to our region……”We have fantastic Bass Fishing!” 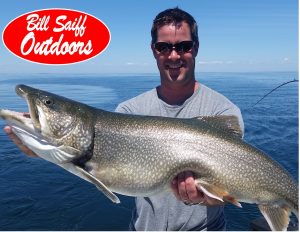 May through August is the time to target “Trophy Lake Trout” and these big fish just keep getting bigger!  Last season the Saiff Fleet experimented with Freedom Tackle’s “Cut Herring” Plug Bait and Dave’s “Super Baits” for giant trout.  We still used our traditional methods but rolling plastic Plug Baits was a definite advantage when targeting the biggest fish!  Watch the Bill Saiff Outdoors Channel on YouTube to see some of the incredible Lake Trout that were taken during the 2020′ season.  We also filmed a great video titled “Fishing Dinosaur Lake Trout” that can also be seen on our YouTube Channel.  This video highlights huge Lake Trout being taken on Pro King Magnum Spoons.  Check these out and book a GIANT LAKE TROUT adventure in 2021′! 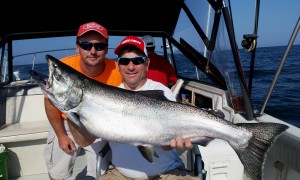 June and July represent the best time to take summer Kings!  Our buddy Ron Cohle holds a Jumbo July King that was taken trolling a spoon pattern.  We refer to the June/July period as the “Hot Zone” because fish are big, plentiful and almost anything can happen!  Angler’s can also target Kings during the “Staging Period” with generally occurs from Mid- August through Mid-September.  The Kings are darker during this time frame but they are at peak weight as they prepare for their return to the tributaries.  In addition to providing “World Class Fishing”, the BSO Team also produces much of the tackle that we use.   Fishermen from all over North America use our Salmon Flies, Wingers and Lake Trout Rigs to catch their biggest fish…… Come visit us in 2021′ and watch us put this gear to use on your next trophy!